In order to properly understand this domain you need to use specific language (as with virtually everything else).

Artificial General Intelligence (AGI) is what most of us are familiar with from movies and pop culture in general. It's the artificial intelligence that has reached the same level of the average human (although there's an interesting development that makes it less a level but a split-second moment before an extinction-level event to follow – we'll get to that in a future article).

Artificial Narrow Intelligence (ANI) is what's already in your pocket. Actually it's on your phone, you might not have your phone in your pocket right now. It's Siri or Google Assistant. It can also be found in any place that tackles highly specific tasks that require complex computation and pattern recognition – Starcraft matches for example.

You get the point. But take a look here for some use cases other than gaming.

Some people use the terms Strong AI and Weak AI. You might also be one of those people. If that's so then cool. A Weak AI that takes care of a nuclear facility can malfunction its way to a second Chernobyl but we're getting too technical here (or I should start writing an Oscar-winning motion picture based on this plot).

Back to the AGI versus ANI idea.

We're nowhere near to having an AGI and [your favorite pocket AI] is quite basic even if it can play your favorite song in just one try and spell out your name when you ask it “What's my name?.”

Around September 2017 I was in the middle of building the landing page for a new online advertising campaign I wanted to run.

“Chatbot” was the new tradeshow-born buzzword of the C-level conversations at that time.

As any good marketer I searched how I might use this “chatbot/chat-bot/chat bot” in my new campaign. I like getting my hands dirty and took some chatbot software I found for a spin. Fast forward to today, most of them are still doing good. One, I'm quite sure is no longer in business.

I know, you'll want to know about that one first.

In very few words: it was powerful but damn, it took me hours to understand how that thing worked. Ultimately, it was definitely overkill for what I (and in retrospect probably many others) needed. So probably there was a complexity-usefulness issue.

The one Chatbot software I actually paid for was Landbot.io.

And in all honesty it wasn't even ANI. It was, and still is dumb-automation in a Chatbot form.

No, I have no financial ties to Landbot.io–only emotional ties. You simply never forget your first. Myself.

Why would I spend hundreds of hours to set up an actual Chatbot that actually understands what you're saying, pattern matches it with other people who have asked the same thing and offers the same solution as it did to everyone else (to vastly oversimplify things).

The outcome is the same for the end user, whether there's an actual AI or some good automation flows that I, as a marketer, have set up as a sort of interactive FAQ.

It still ends in a “Talk to a human” request. 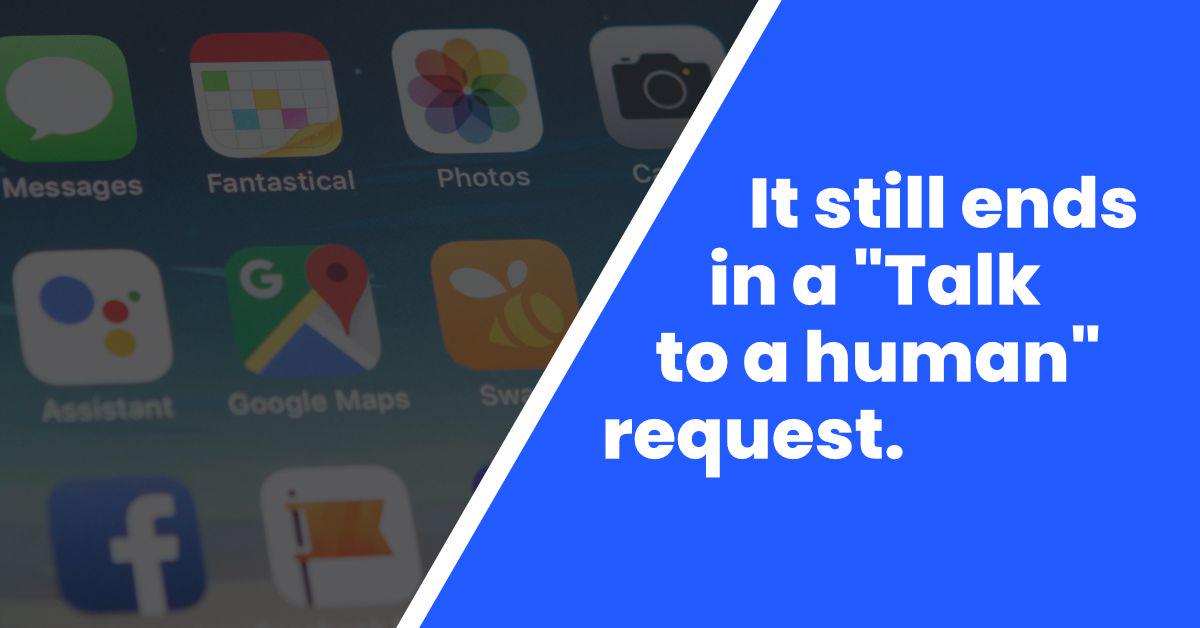 My gut feeling is that direct human interaction will soon become a differentiator.

If I close my eyes, I can already visualize companies advertising “100% human support” right next to their .99 prices and 90-day money-back guarantee.

Just look at Apple touting privacy as a selling-point in a world full of Facebooks and Googles.

This is the first article in a series I'll be publishing on this topic.