This article continues the ideas in this one.

Just look at Apple touting privacy as a selling-point in a world full of Facebooks and Googles.

Back in March 2018, the good (then, five year) old Cambridge Analytica took the global news spotlight. They really went out of their way to prove that there is such thing as bad publicity. So bad, in fact, that they quickly went out of business after the, otherwise entertaining, scandal.

Entertaining in a weird way though. Because before that, every Jane and Joe brushed off privacy as something for those old Boomers to worry needlessly about. And let's not forget Mark Z's Hearing Show.

Fifteen months later from that tsunami of privacy-related memes, Apple brands itself as the “privacy-as-a-service company” as discussed in this TechCrunch opinion piece.

If you want to hear it directly from Apple check out the link they plastered everywhere at that time.

So, if Privacy can become a differentiator, could human support/interaction become one too?

Let's take the next few minutes to explore this idea further.

The foundation this argument would need to be built on is value. What makes things valuable in people's eyes, right? Without people valuing something there's no way to differentiate anything (economically speaking; you can still see apples are different from blackberries).

Since we're quite prolific as a species, there are quite a few theories of value. The best one I found that might be the most helpful is the Subjective theory of value thought out by some fellow humans in the 19th century. Thanks guys!

The theory says that value is determined by the importance an individual places on a good for the achievement of his desired ends. In other words, it's all about what we subjectively decide based on how it might help us achieve something we want.

Regarding privacy, we looked at it subjectively and decided after 2018 that we value it quite a lot. Not only because you remembered you searched for some stupid stuff 30 minutes before making the decision but also because you want to feel psychologically safe wherever you (and your phone) are, you don't want your personal data to be sold without your knowledge, and maybe not feel creeped out with ads that know too much.

Before applying this to the “talk to a human” issue, let's also look at some numbers.

Here's a graph of the search volume for the term “Privacy.” I took the liberty of drawing an arrow in the general direction of two milestones we've discussed previously. 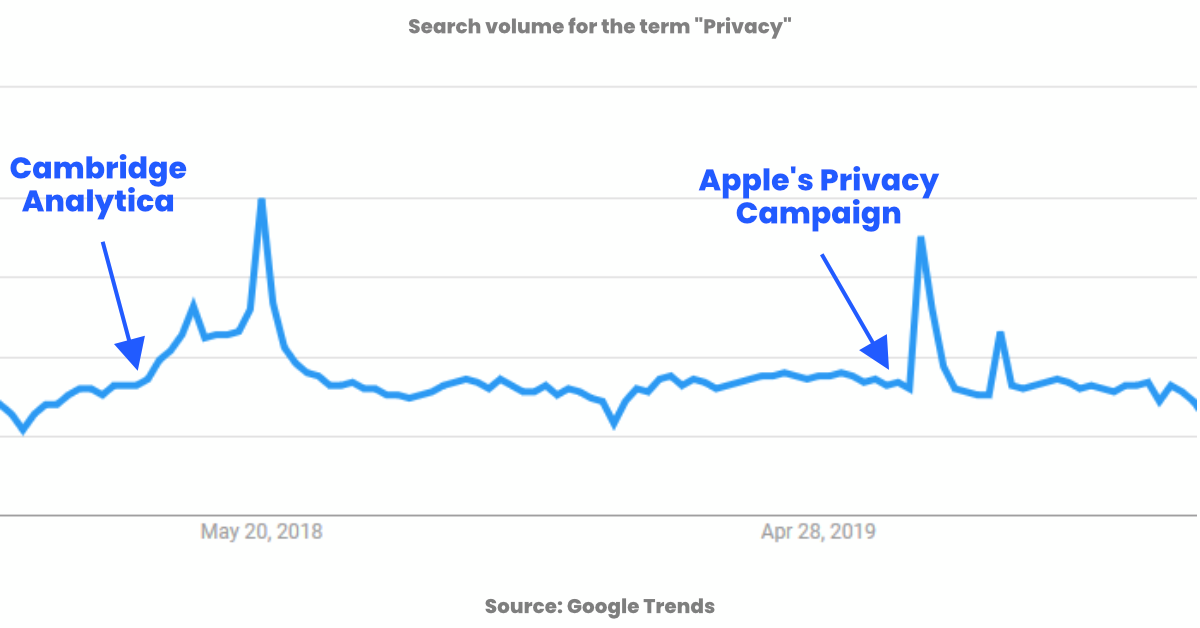 We can see quite an increase in people searching for privacy-related things during two moments that can be correlated with Cambridge Analytica's scandal and Apple's privacy-focused campaign.

The perceived value of privacy was probably impacted. People found out more information on why they should value it more than before. So it stands to reason its value increased.

The UN's Universal Declaration of Human Rights has privacy mentioned in Article 12 (out of 30), Apple currently includes it on their iPhone 11 page about three quarters in. Still, for a tech company to bring it forward like Apple has, it makes for a good case in it's increase in subjective value.

Now, let's look at the “human interaction” as a differentiator issue.

My guess, and it is a guess (!), is that at a certain point in the near future, we'll value direct human interaction a lot more as it will happen less often (due to ANI becoming more ubiquitous, especially in customer support).

Now let's look at some numbers as well. 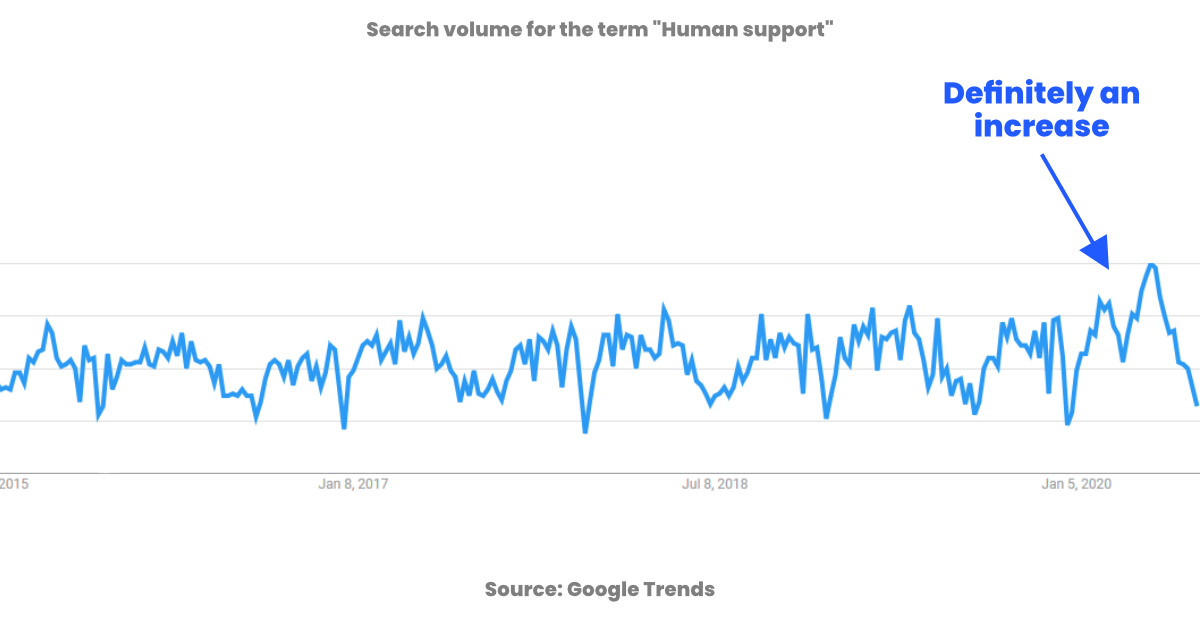 Now, I understand there are issues with this, as it's an aggregated search volume for an imprecise term, but I couldn't find an equivalent 1-word umbrella term. This is the closest I could think of.

Moving forward from this idea, we actually have surveys that show a considerable preference for interacting with humans. You can find some here, here and here.

By now, you probably have an opinion on this subject and I'd be grateful to read it in the comments.

So let me present the next logical question: if we are to include this in our marketing, what would be the best way to do it?

This is the second article in a series I'll be publishing on this topic.